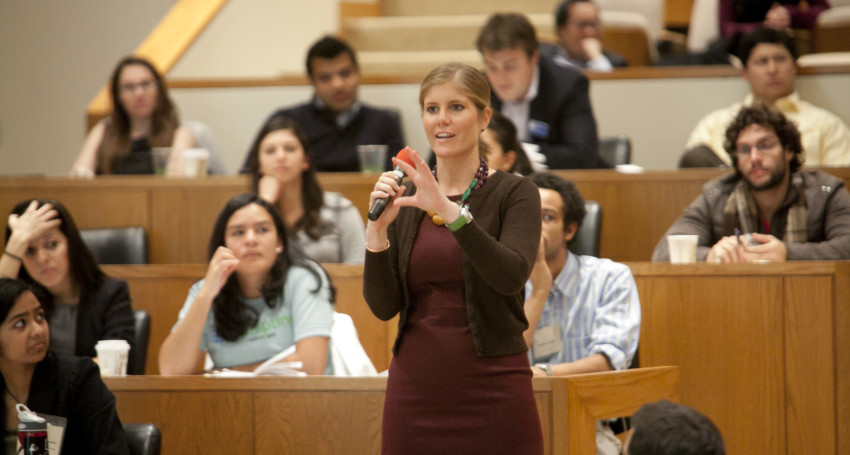 My official title is Vice President of Syndications and Strategy, but that means very little to other people. I essentially oversee the growth and innovation pillars, or business units, at Calvert Impact Capital. Essentially, it includes strategy, communications, impact, and new business development. New business development involves overseeing our syndications services, our new product development, and thought leadership, so it's a very diverse role that has evolved quite a bit over my five-year, nine-month tenure.

I have had three roles since I started at Calvert Impact Capital. I started on a team that we used to call Strategic Initiatives, which is now our Strategy Team. I then transitioned to become a Director on the Investments Team, so I was on our portfolio team for three years, looking at deals and doing deal underwriting and management. And then I took on this role officially in early 2018.

What I love about the work I do at Calvert Impact Capital is that it is both very broad and very specific and that it changes day to day. As we strategize, we must think very big about what we do, what we want to become, and what we want to accomplish in the world. At the same time, part of my job is very specific – for example, closing a new syndicated lender into a deal that we're working on and reading through legal documents to make that happen. What I like is that it's both thought provoking at a global level, or a macro level, and very tangible in terms of getting things done and seeing money moving into communities that otherwise wouldn't have access.

I like to say my career has been a random walk, but now makes a little bit more sense. I have bounced between the public, private, and social sectors since I left college. Not intentionally at the time, but now I do it more intentionally. I started in financial services working at a traditional private wealth management firm in New York. I then decided to take a sharp left turn and join the Obama campaign as a community organizer. I was on the ground knocking on doors and making calls for about a year as a part of the 2008 presidential campaign, which opened my eyes to the social and political sectors that I thought were very interesting from a mission perspective and brought a lot more fulfillment to my life and work. I continued doing that work at the White House where I worked as a policy analyst on drafting of the Affordable Care Act.

I loved the public service aspect of that work, but I really wanted to take a more market-driven approach to creating solutions. I went back to business school to figure out where in that gray area I was meant to be. I discovered the world of impact investing in business school under the tutelage of Cathy Clark, and I decided that that was going to be my direction. Before I jumped into this space feet first, I wanted a little bit more private sector experience, so I went to McKinsey and Company where I was a management consultant for a couple of years, mostly doing work in the health sector, so that I had an understanding for how large corporations think and work. Then I came to Calvert Impact Capital, where I have been ever since.

I should mention that I interned at Calvert Impact Capital during the summer after graduating from business school and before starting at McKinsey. I got to know Jenn and Leigh and the team, and when I left McKinsey, it was around the time that Jenn became CEO, so she said, “come back!” and I did.

I think landing at Calvert Impact Capital makes so much sense for me because our work naturally intersects with all three sectors on a daily basis: we intersect with governments, we intersect with the social sector, and private sector. Having worked in all three of those sectors, I think that it’s my ability to bring those perspectives to this work that is the common thread of my professional journey.

But then there's a million other people. Martin Luther King Jr., for example. I think people who have built and run significant social movements would be my priority, but for now I would say Barack and Michelle Obama.

The Daily podcast that The New York Times puts out—I am a Daily enthusiast. I listen every day on my way to and from work and feel like it's a great way to dive into a subject that's relevant in the news. I have also been fascinated by the New York Times series on slavery, the 1619 Project, that is both a podcast series and a series of articles. I would highly recommend it; it’s about how slavery and the economy of slavery has had lasting effects across our entire social, cultural, and economic system, and what we can and should learn from that -

6. If you had to describe Calvert Impact Capital in one word or term, what would it be?