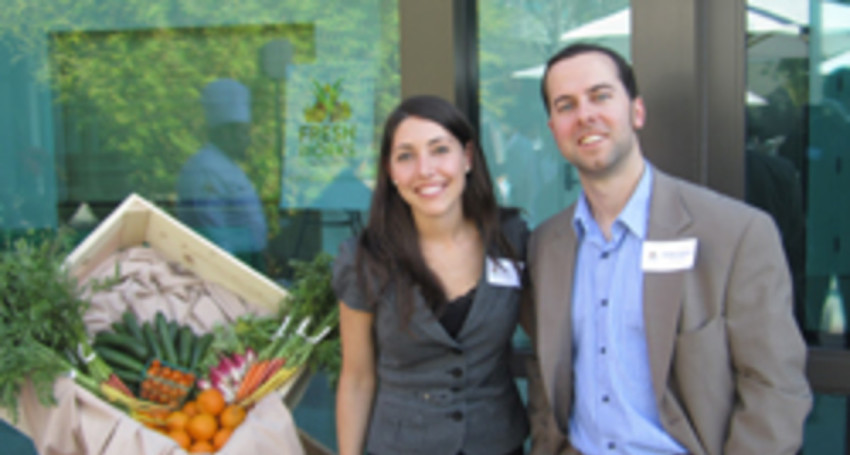 Justin with Flavia Romero of Microplace

Calvert Foundation Relationship Manager Justin Conway traveled to Los Angeles, CA this week for the official launch of the FreshWorks Fund, California's new healthy foods financing initiative, which brings together a large and diverse group of partners to improve access to healthy food in the state's many food deserts.

I'm on the road quite a bit, especially on the West Coast, but somehow I've always managed to avoid Los Angeles, CA. It is by far one of the only big cities in North America where I haven't spent some time. I've circled Southern California from just north of LA in Ventura, out off LA's coast in the Channel Islands, to south around San Diego, but I’ve never been to LA. Never even flown through LAX. How can this be?

So off to LA I go for the FreshWorks Fund launch…but of course, first for a taco. I mean that's what I'm supposed to do, right? I don't have time to find actors' stars on Hollywood Boulevard or drive by their homes, or the many other more cultural and beachy things I'd like to do. In my very limited time in LA, I'm just hoping to squeeze in a food cart taco. Then I see Homeboy Industries – a social enterprise I've known of for years that helps former gang members turn their lives around by, among other things, employing them in the food service industry. – and the accompanying Homegirl Café. I honestly have no idea what food they're going to serve, but lucky for me they have tacos. Not tacos like I was originally expecting from LA (there was hibiscus flower and carmelized onions in one of mine), but amazingly good. It was also great to see that in addition to their social mission, they have a strong commitment to sourcing from local, organic urban farms…which is what I'm in LA to support. Just a couple minutes away from Homeboy Industries, is The California Endowment's beautiful headquarters outside LA's Chinatown, where all of the partners have come together to launch the FreshWorks Fund. There were inspiring speeches, amazing food from local chefs, fresh produce all around, lots of networking among the hundreds gathered, and an overall buzz. I was there to speak about Calvert Foundation's unique role in the FreshWorks Fund – to provide a way for the public to invest in increasing healthy food access. Calvert Foundation is a pioneer in helping all types of investors, big and small, institutions and individuals, get involved in community and impact investing. Through our partnership with Microplace, people can invest in the FreshWorks Fund Initiative at investment levels of $20 or more. As one person at the event said to me "I think it is great that I can be like the institutions (and invest)…this is my favorite part…and thanks for making that happen."

Having worked closely with community and impact investors for the past 10 years, I've heard many similar stories from individuals appreciating the opportunity to invest in a way that historically only institutions have been able to do. It's not a surprise that I'd hear it in LA too, but it makes me realize that we haven't been as active with the investor and financial advisor community around here. We have several great partners based in LA including Century Housing and Clearinghouse CDFI, and many more like NCB Capital Impact that are very active in the area. Now, through the FreshWorks Fund, we have many more partners in LA. All in all, having only spent 12 hours in the city, I fly away convinced that Calvert Foundation has an opportunity to get more folks involved in what is a huge, but largely untapped market. I hope my colleagues and I, as well as other impact investing partners, are able to spend many more days helping investors in Los Angeles understand how they can invest in their communities…and finding great tacos.