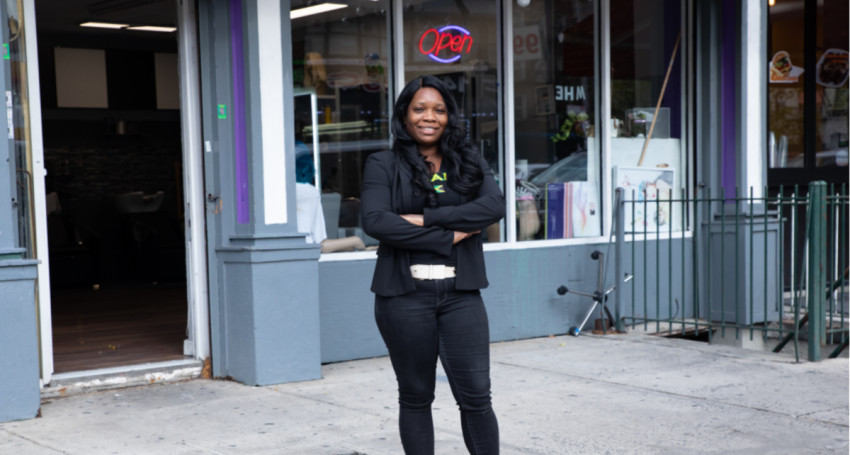 Grameen America is a nonprofit microfinance organization dedicated to helping women who live in poverty build small businesses to create better lives for their families. The organization offers microloans, training and support to transform communities and address poverty in the United States. Since opening in 2008, Grameen America has invested over $1 billion in women entrepreneurs.

We’re proud to have had Grameen America as a portfolio partner for the past eight years.To highlight their great work and ambitious plans for the next decade, we’re sharing the story of Mitzie, one of the many women who have found success with support from Grameen America. Read more stories about the entrepreneurs Grameen America supports here. Learn more about Grameen America on our portfolio list.

Mitzie has worked with hair for over 16 years and owns Mitzie’s Hair Boutique, a popular salon in Harlem.

Born into a large family, Mitzie is the tenth of 15 siblings. Over two decades ago as a 20-year-old, Mitzie moved to New York from Jamaica. Her transition to the United States had an added challenge to the major transition of moving countries. In search of greater opportunities, when Mitzie moved to New York she had to leave her baby daughter in Jamaica with her own mom as she setup her life here.

“It was very, very hard leaving a child behind. I didn’t realize how difficult it was going to be at the time to come here and leave her back there. It was very painful.”

There were times at the beginning when Mitzie felt she would not remain in New York. It was too painful to be away from her daughter, and she considered going back home.

Today, Mitzie’s daughter lives in New York. She is 22 and helps Mitzie with the salon’s bookkeeping and operations. Mitzie also has a second daughter who is six years old.

When Mitzie first arrived in the United States, she had dreams of becoming a dentist and was working as a cashier as she established herself in the city. Her trajectory quickly changed when she was at work in downtown Manhattan as the Twin Towers began to fall.

“After September 11 I did not want to go downtown anymore. I witnessed the whole thing.”

As a way to move through the trauma of this experience, Mitzie’s sister, a licensed cosmetologist, encouraged her to consider hairdressing and Mitzie started working in the beauty industry for the first time.

“I started out as a braider and I realized I had a passion for hair.”

After Mitzie completed beauty school, she became business partners with her sister for six years. When the pair sold their business, Mitzie started renting out booths at other salons.

“I realized I really wanted to have something for myself. I was looking for spaces and then I came across this location.”

Mitzie spent time completely renovating the current location of her salon, adding hairdressing stations, leveling the floor, and removing all remnants of its previous life as a butcher store.

Mitzie had initially tried to access a loan from a bank but was told she needed to operate her business for at least a year to qualify. When one of Mitzie’s clients told her about Grameen America, she was eager to join the program to access loans for her fledging business. Support from the other women business owners in the program is another positive for Mitzie.

“I like that the ladies at the center meetings—whenever we team up—they encourage each other to build, we talk about networking, setting goals, and we try to help each other. It’s always an exciting time to meet with them.”

At her salon, Mitzie and her team offer all types of cuts, color, styling, and they also make wigs. Mitzie believes in haircare and her ultimate goal is to start her own product line and launch a hair extension business with future loans from Grameen America. She is working hard to make her own brand a reality and is excited about the future.

“Why not sell everything that the client requires here? A one stop shop!”