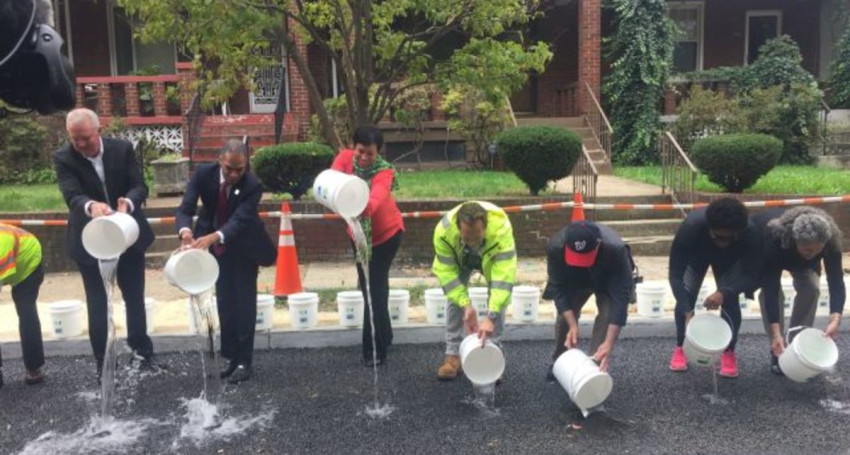 We are thrilled to be invested in the first U.S. environmental impact bond (EIB), which was issued by DC Water, the District of Columbia’s water and sewer authority. The proceeds of the bond will finance the installation of green infrastructure to manage stormwater runoff from 20+ impervious acres of the Rock Creek watershed in Washington, D.C. – the first such project in the District. The installation is part of DC Water’s Clean Rivers Project.

The Clean Rivers Project is DC Water’s program to significantly reduce combined sewer overflows (CSOs), a particularly nasty outcome of an old combined sewer system that serves about one third of the city. During large or high intensity storms, the volume of sewage and stormwater can exceed the combined sewer system capacity. Stormwater and sanitary water mix in pipes and overflow into area waterways, such as the Rock Creek and Anacostia River, which both combine with the Potomac River and ultimately flow into the Chesapeake Bay.

One solution to CSOs prior to the EIB was to construct massive underground tunnels and diversion facilities (also called grey infrastructure) to expand the capacity of the sewer system. However, early on, engineers realized that a combination of grey and green infrastructure could manage CSOs effectively and provide additional benefits to the community. Two weeks ago, some of us from Calvert Impact Capital attended the green infrastructure kick-off in northwest Washington, D.C. At the event, George Hawkins, DC Water CEO and General Manager noted in his remarks to the crowd, “the best storm-water management known to man is a tree”. He eloquently and simply illustrates that at its heart, green infrastructure works so well because it mimics nature.

Green infrastructure practices are stormwater management practices that use the earth’s natural resources and processes, like trees and other plants and soil. These practices slow down, clean, and reduce storm-water runoff prior to it entering the sewer system. Examples of green infrastructure that will be implemented in D.C. by this project include:

Combined sewer overflows are a national water quality problem. Currently, approximately two billion gallons of CSOs overflow into area waterways on an annual basis, creating serious water quality issues downstream of the overflows. These overflows contribute to things like harmful algal blooms, dead zones, and fish kills, all fed by nitrogen, phosphorus, and other contaminants found in untreated sewage from the overflows. That 772 communities in the U.S. have combined sewer systems means municipalities and water utilities need as many cost-effective viable tools as possible to reduce or eliminate overflows in a cost-effective manner.

The Potomac River is the fourth largest river in the U.S. and has a drainage area of about 14,700 square miles. Over five million people live within the Potomac watershed and are directly impacted by its water quality. Approximately 486 million gallons of water per day are withdrawn in the Washington area for water supply. These communities stand to significantly benefit from the Clean Rivers project.

Green infrastructure has a many other benefits too, including beautifying the streetscape, reducing urban heat islands, reducing localized flooding and drainage issues on streets and alleys, fostering habitats for birds and pollinators, and reducing pumping and treatment demand by lowering the volume of water that makes its way to D.C. Water’s treatment facility, ultimately reducing its energy usage.

The installation of green infrastructure is a great way for D.C. to build its resiliency to climate change. As the effects of climate change bring more and more severe weather patterns, combined sewer overflows are likely to be more common. Further, green infrastructure can be installed quicker than gray, meaning area residents will enjoy cleaner water sooner. Construction in Rock Creek commenced on September 5, 2017 and is scheduled for completion of all installation and testing in early 2019.

One hope for this bond is that the structure and the use of green infrastructure would serve as a model for other municipalities facing combined sewer overflows. Or, at the least, that it would break ground so that others could improve upon it. While it is only about a year since the financing closed, we have anecdotal evidence that several water utilities and other groups tackling water quality issues are interested in replicated the structure or building off the structure to create their own environmental impact bond.