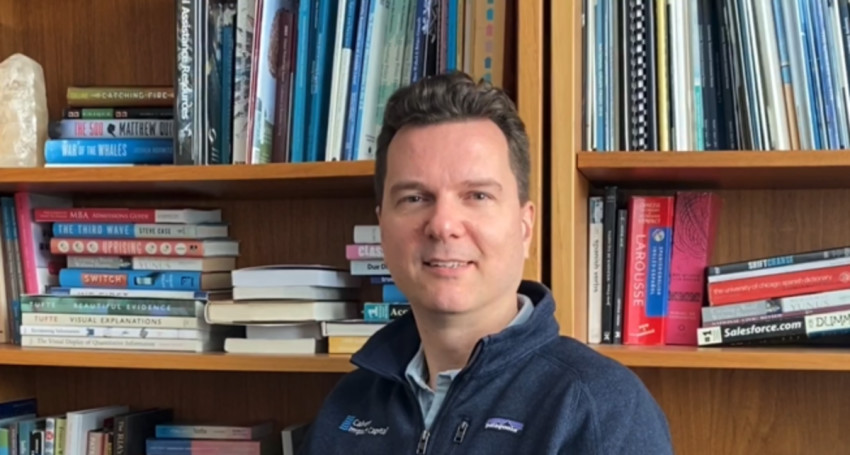 I also work on the strategic side of new initiatives that we’re leading or involved with. I meet with a variety of people across the organization and at partnering organizations to explore different paths for innovative work. Additionally, I spend a great deal of time analyzing, reviewing, and crafting new investment deals with my colleagues on the Risk and Investments teams.

Most importantly, if obstacles arise that impede any of our employees from being able to do their jobs, I work hard to help them overcome those obstacles. Ultimately, much of my day-to-day work comes back to meeting with everybody, talking to them, and finding out what I can do to help them complete their work successfully.

Today, what excites me most about this organization is the same reason I was originally drawn to it—Calvert Impact Capital is a real leader in the industry.

Calvert Impact Capital seeks to innovate and create opportunities for impact in unprecedented ways. When I consider qualities that constitute a leader in the industry, I think of organizations that lead the charge into unchartered territory while bringing others with them. I think that's something that Calvert Impact Capital has done for a long time. We were really one of the first organizations to begin lending the way we do, in the sectors we lend to, in the countries we lend in, in the structures we create, alongside the unique partners we serve.

Today, we're always adding, exploring, and expanding on new ways that we can more efficiently channel capital to traditionally underserved communities or issues. When we’re trying something new and pushing the envelope, we do so with the intention of bringing others along with us. In doing so, we seek to bring impact investing to the mainstream by shifting the markets. We’re not afraid to step out and try new things, but we do it thoughtfully and with our “risk hats” on to ensure we're protecting the organization and the communities we serve.

From the beginning of my career, I always knew that I wanted to be a CFO. Luckily, I had a great mentor who helped guide me early in my career. He advised me that I should get as much broad experience as I could in both finance and corporate strategy. He told me to learn as much as I could by working in a variety of different jobs, different sized companies, and countries. He said that those experiences would create the “CFO of the future” by providing me with a broad understanding of business.

I started working as an accountant, which is a very common starting point for CFOs. Then, within that same company, I moved over to work in the Treasury Department. At this $20 billion company, I was greatly able to expand my financial and strategic knowledge through different roles, and with their support attended London Business School. From there, I moved on to corporate finance and ultimately into investment banking.

As an investment banker, I advised big companies on how to grow their businesses, restructure their risk profiles, and access new markets for finance or acquisitions. Throughout my career, I always tried to find ways that I could use financial acumen to create solutions for the environment or for people. For example, when I was an investment banker, I worked on energy retrofitting solutions. I helped big clients understand how they could reduce their energy consumption in a profitable way.

After working in investment banking for almost six years, I then got a job at the World Bank in Development Finance. There I worked on innovative finance, consulting with wealthy countries on how to make their money go further in development by setting up new financial structures. I worked on issues such as child vaccinations and sustainable agricultural solutions. Like my work at the investment bank, we wanted to demonstrate that these important social or environmental solutions were economically or financially smart ideas, too.

I first began to hear of Calvert Impact Capital when I was working at the World Bank. I saw Calvert Impact Capital as a strong private sector solution that brought similar kinds of ideas to the issues we were working on in development finance. When they posted a job opening for a CFO, it was a match I'd been looking for all my career.

The first person I would invite is Sophie Scholl. Back in the late 1930’s, Sophie, along with her brother and their friends, created a group called the White Rose movement. The movement began when they realized that the Nazi regime was gaining power in Germany. They created the White Rose to bring awareness to people in Germany about what was happening under Hitler. Taking a stance as they did was incredibly dangerous, even though their means were peaceful and their calls to action were as well. Amongst many other things, they would produce informational pamphlets explaining what was going on to the general public, so people understood the gravity of the situation.

Sophie and the others were incredibly brave people, paying the ultimate price at the hands of the Nazis, so she is somebody I think it would be really cool to bring to dinner. I would ask her about her experience and how she could stand up so bravely in the face of something so dangerous at a time when everybody around her was going with the flow.

I'd also invite John F. Kennedy because he’s somebody I've always admired as a leader. So many leaders get caught up in the mundane of today and only focus on what's happening today. But I believe John F. Kennedy was always envisioning the future impact of his leadership decisions. He always talked about how he wanted peace not just for his time, but for all time. I think his ability to think about the implications of his leadership decisions for the future was impressively unique.

The third and final person I’d invite is my father. He was a great guy and his time here was far too short. He's someone who could give me words of wisdom and advice in a way that nobody else could.

Overall, I would hope to discuss how each of them, in their own right, rose up against issues that they were facing and how I might learn from their experiences.

Not long ago, I read a book called “Defying Hitler” by Sebastian Haffner. It’s an excellent read, so I think everyone should read it. The book describes the stories of how ordinary people became swept up in the cult-like injustice around them as a response to their environment.

I'd also encourage people to watch David Attenborough's “Seven Worlds, One Planet.” I've only seen short segments from it, but it looks amazing and I've seen a lot of other phenomenal stuff from David Attenborough. He does a fantastic job reminding everyone why it's so important to care for the planet.

In the same vein, I'd say if people haven't seen “An Inconvenient Truth”, they should definitely go see it. It was a game changer for me. It really got me thinking and researching, trying to figure out how we could solve large-scale environmental issues.

6. If you had to describe Calvert Impact Capital in one word or term, what would it be?