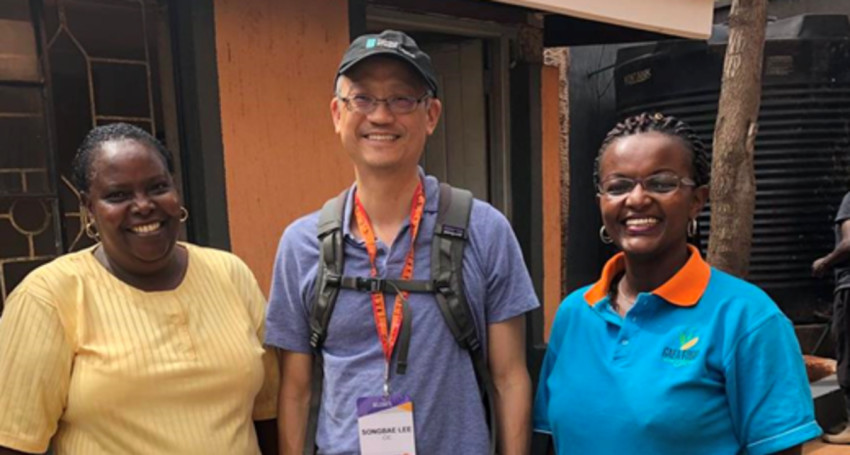 I am a Director on the Investments team, and the core of our work is getting money out the door by making new loans. This includes everything from sourcing, to underwriting, to presenting deals to our investment committee for approval. A big part of my job is developing relationships to help find deals and to stay abreast of what’s happening in the market. I mainly do that through talking with people outside our organization regularly, which is one part of my job that I enjoy the most.

The first thing that attracted me to Calvert was the impact screen that the organization applies in addition to the standard risk/return investment analysis. I was also glad that I would have a chance to work across multiple sectors and have exposure to both US and international markets.

While talking to people externally is a big part of getting my job done, working with people internally is what makes my job so enjoyable. I especially like working with junior staff who are enthusiastic about learning. The biggest impact I can personally have is by sharing my experience and what I’ve learned in my career to help with the professional development of younger staff members. Plus, they are often willing to take on extra work just to learn more, which I am always happy to provide to them!

When I was younger, my parents encouraged me to travel to developing countries which they said, “might be poor in material wealth but are rich in cultural wealth.” When I was older, I began to consider graduate school. Law school and medical school seemed difficult, so by elimination, I decided to pursue business school. I struggled for a long time with whether to pursue a career in the public or private sector.

My first office job was for the life insurance association. As a junior staff member, I was eager to learn more, so I read the Excel manual for fun which has still served me well until today. My first finance job was for a hotel company based in Georgetown where I worked on acquisitions. I learned everything I’ve ever needed to know about financial analysis in that job. After that, I joined the Peace Corps to pursue my interest in international economic development.

In business school, I couldn’t find an international economic development internship so, like many of my classmates, I ended up working in finance, first in New York City and then in San Francisco. I knew that I would eventually like to go back into development work at some point, and that decision was made for me sooner rather than later when I was laid off during the financial crisis.

Once again, I became an intern, this time for Mercy Corps in Bishkek, Kyrgyzstan, where I worked for their microfinance institution (MFI). I was later promoted to CFO, where I managed the finance team and was responsible for raising capital from international lenders. I first encountered Calvert Impact Capital, then known as Calvert Foundation, when I was looking for a loan for the MFI. We didn’t get a loan from Calvert Impact Capital, but a few years later, the person I spoke to at the organization told me he was leaving, and I applied for his job.

My time at Calvert Impact Capital is now coming to a close, as I have recently accepted a role at USAID where I will be helping them address financing gaps in agriculture and food systems. While it was a hard decision to leave, this new role feels like a natural progression as I have become interested in working on the policy side to help lay out the groundwork for longer-term change in the countries that we work in. When I graduated college, I thought I would learn everything I would need by the time I was 40 years old, and then coast until I retired. Now at age 50, I’ve realized that the most important and valuable part of my education has happened during my last eight years at Calvert Impact Capital. The lessons I have learned will be essential in informing everything I do in the future.

I am not really into hosting dinner parties. The first question I always think is, “Do I have to cook or entertain?” I usually invite people over to entertain my kids and order pizza. But if pressed, I would choose to see two of my friends from college who died young. I still think about both of them often.

Recently, I've started reading books after we watch the movie versions with my kids. My family and I recently watched “October Sky” which is about a boy from a coal town who learns to make model rockets for a science fair. After watching the movie, I ordered the book and am reading it right now.

Another movie we watched based on a book which I read after was “The Boy Who Harnessed the Wind” about William Kamkwamba. It is an inspirational story about a boy living in Malawi who creates a windmill that generated electricity. My daughter often asks me why I want her to be an engineer and this story is one example why.

Additionally, when I was underwriting our One Acre Fund deal, I read “The Last Hunger Season” by Roger Thurow. That story is about a reporter who follows families of farmers during the period after harvest season. The book was a strong reminder about why we do the work that we do at Calvert Impact Capital. __ 6. If you had to describe Calvert Impact Capital in one word or term, what would it be?__